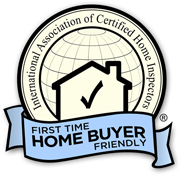 This inspection can help you understand and plan for the demands of maintaining your home properly.  Some tasks are seasonal, and some items require more frequent attention.  Let us help you start on the path of responsible homeownership by identifying any issues, and educating you about what should be done to keep your home in top condition year-round.

Radon is a naturally occurring radioactive gas.  It’s found in soil, rock, and even water as the breakdown of uranium.  When uranium is broken down, it’s released into the air and can build up, causing critical long-term health effects.

The gas can sometimes be concentrated in homes built on natural soil with natural uranium deposits.  It enters through cracks in the floors, walls, and even through construction joints or gaps around service pipes, electrical wires, and pits.  The Environmental Protection Agency (EPA) reports that 1 in every 15 homes in the United States is estimated to have elevated radon levels.

When radon gas enters the body, it exposes the lungs to small amounts of radiation.  In small quantities, experts say this is harmless.  However, in persistent exposures or larger quantities, radon can damage the cells of the lining of the lungs, increasing a person’s chance of developing lung cancer. Millions of Americans have had their homes tested and you should too.